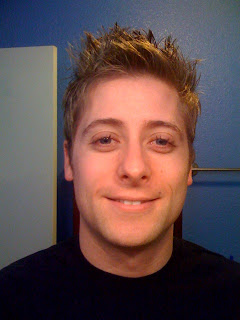 I took this photo with my iPhone. Some of you may be asking yourself, "how did that handsome devil get this self portrait to look so good?" Well the answer is in the mirrors - I'll explain later. Those familiar with the iPhone know that taking a picture of yourself is near impossible because the screen is on one side and the camera is on the other. You might say, "that's no big deal, there are plenty of cell phones that are designed this way." Yes this is true, however, those cell phones all have buttons that you can physically feel and can at least estimate where you're at in the view finder. The issue with the iPhone is that there are no buttons due to its multitouch interface and therefore trying to accurately take a picture is like trying to touch something that isn't really there. Now, back to my initial question, how'd that handsome devil do it? Well, I stood in front of the mirror with the camera's lens facing me while I looked at the reflected image of my iPhone's screen in the mirror. It worked great because I could see where my finger was in relation to the camera's virtual button. My friend Matt and I both agree that Apple should keep the camera lens where it is but add one to the screen side as well offering self portrait ease. What do you think?

Sent from my iPhone

Posted by Aaron Shafenberg at 4:42 PM

I would agree. Oh wait, I am that friend.