How many mice do you have running around your house? 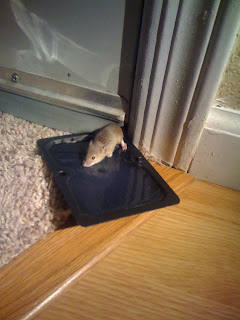 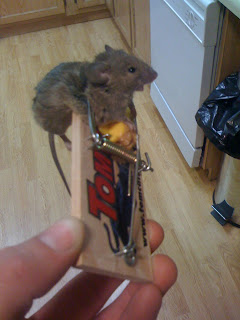 For the past couple of days we've been thinking (hearing!) that we have mice. Finally one night, we saw one scurry across the room and duck into a little hole behind our refrigerator. The next day we saw it on our counter. It ate through a new loaf of bread we had out, and probably some other stuff. Anyway, we got some traps and set out to get rid of him once and for all. To our dismay, our mouse was pretty smart... he knew how to eat peanut butter off a mouse trap without getting caught. The next day we got a few different mouse traps, one type being the pad of glue... again, our mouse must have been around, because he knew not to walk on the glue and would scamper around the dang thing. I was so mad! Tonight I was determined to get him. For a couple of hours, I was chasing him around from our kitchen, to the living room, to him being under the piano, then into the laundry room, back to the piano, back to the kitchen, etc. We had traps of all sorts everywhere. Finally, I gave up, walked away and decided to take a break only to come back to a dumb mouse on the glue pad. Can you imagine the sense of accomplishment I felt? but wait, it's not over, out of the corner of my eye, I saw another mouse go under our piano! We had two mice. I hurried and grabbed another glue pad and slid it under the piano near the mouse, who, being just as smart as the other decided it to be a better idea to walk around the pad. I pulled out the piano scared the heck out of it and guess where it ran? right into the glue pad! YES!! I GOT HIM! Again, feeling pretty puffed up about the fact that I had caught 2 mice in a 20 minute period, I took them outside (still stuck to the pads) and threw them into the dumpster. It was over!! Or was it? not 15 minutes later, another mouse got caught on another glue pad (can anyone say best invesment ever? maybe not best, but still pretty dang good). Then 5 minutes later, SNAPPP!!! one of the traps on our counter went off, we had caught yet another mouse... that's 4 mice within a 45 minute period! and as I'm blogging this I actually saw another under our stove... where does it end? anyway, here's a couple of pictures I took with my iPhone of the last 2 mice caught... enjoy! and maybe you have mice too!
Posted by Aaron Shafenberg at 10:49 PM

Oh man!!!!! That sucks-sounds exactly like my own house! UGH! Glad to know I'm not alone in this journey.

I have this same problem. Caught 3 tonight and seen 2 more since. I must have a lot pi f mice for them to be si active

I have one in my stove one under my counter who refuses to be caught...and my cat who can catch them In 2 sec is outside and won't come in!! They chewed my self under the sink I hate the nasty little diseased things!

What to know on roulette: Learn the rules and how to play
A roulette game 당진 출장안마 is a 밀양 출장마사지 casino where the objective is to win the number of chips that 부산광역 출장샵 your team holds. In a 인천광역 출장안마 game of roulette, each team sets 경산 출장안마 a